Because you all are continuing to send me so many fabulous questions each week, this week, I’m taking two that are similar and responding to both of them. Enjoy! 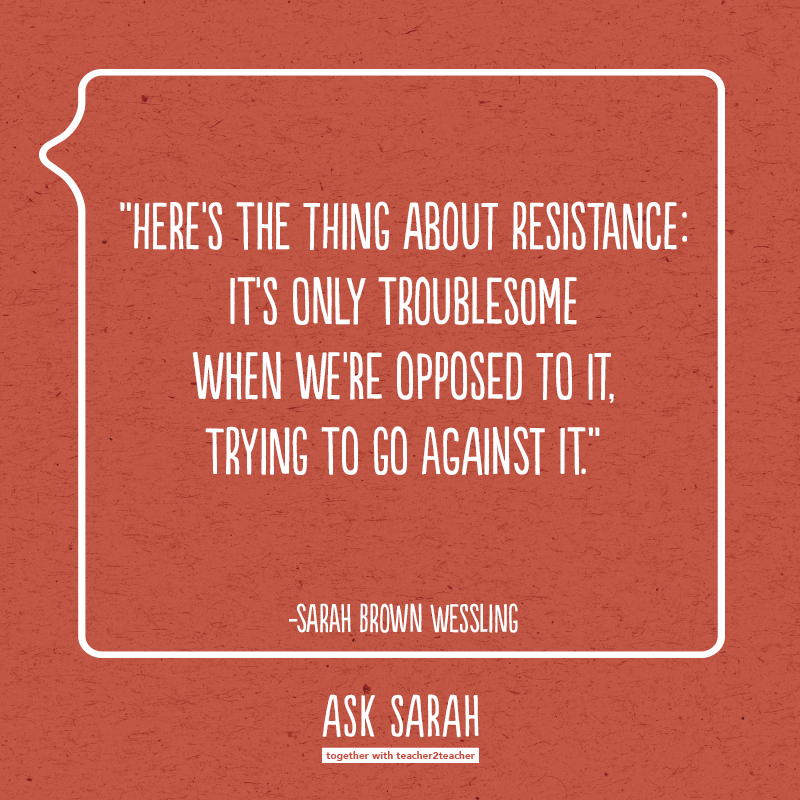 How do you handle resistant teachers?

How about this? What do you do with the students who refuse to do any class work? Administration won’t help. Parents can’t get them to work and they refuse to do anything?

I have three kids: 12, 10 and 6. Boy, girl, boy. They love each other, they need each other, and they fight. It usually starts over a thing, some toy. I always know this particular kind of fighting because I can hear it from far away: “That’s mine!” “No, it’s mine! You stole it from me, I know you did.” By the time I can reach the ruckus, I know what I’m going to find. Two kids, four hands, one toy, each pulling it in opposite directions.

Anyone who has walked into this situation can probably predict my next words, “If you keep doing that you’re going to break it. I’m serious. Then no one will get it.” I put my hands in the middle of them, add some weight to the hopeless object getting yanked back and forth and try my best to de-escalate. By this point, the fighting isn’t even about the toy anymore, it’s about everything the toy represents: “You’re the most annoying brother ever!” “Well, you’re the most bossy sister ever!” “I can’t stand you!” “I’m never playing with you again!”

Here’s the thing about resistance: it’s only troublesome when we’re opposed to it, trying to go against it. Moreover, it’s an opportunity to find out what’s really causing this horrible duel of push and pull.

Like nearly every instance with my children, their fight wasn’t really about that toy, it was about a perceived injustice each of them had been hanging onto for several days. My daughter didn’t think it was fair her brother got to go to the amusement park with his friend and my son didn’t think it was fair that he had to sit at all his sister’s softball games for another weekend.

We experience this all the time with students and colleagues alike. There’s resistance to doing work, to trying something new, to having a good attitude. And in those moments we have a choice to make. Are we going to pull tighter or are we going to uncover the perceived injustice and deal with that?

Believe me, I’ve spent plenty of time pulling tighter and when I do it usually comes out like, “If you don’t want to do this work then you’re telling me you want an F.” Or, I’ve said, “You don’t have a choice. If you won’t do this, then I can send you to the office.” I cringe to recall muttering this about a colleague once, “Why can’t we get her on board? It’s like she doesn’t even care.” Of course she doesn’t want an F! Of course he doesn’t want to go to the office! Of course she cares!

It’s just that in the midst of some perceived injustice these act of resistance seem like the last option for our friends and colleagues. We can stop pulling, release the tension and create some space for change. I’ve learned to stop giving directives and start asking questions in the face of resistance.

I’m not saying these are magic questions. But they are a good start. It may take months of asking them before the contention lessens. It may be in direct proportion to how long or deep that perceived injustice runs. Remember, the opposite of resistance isn’t compliance, it’s growth. And we grow when we are willing to struggle.