Reflections on More than Disciplinarians 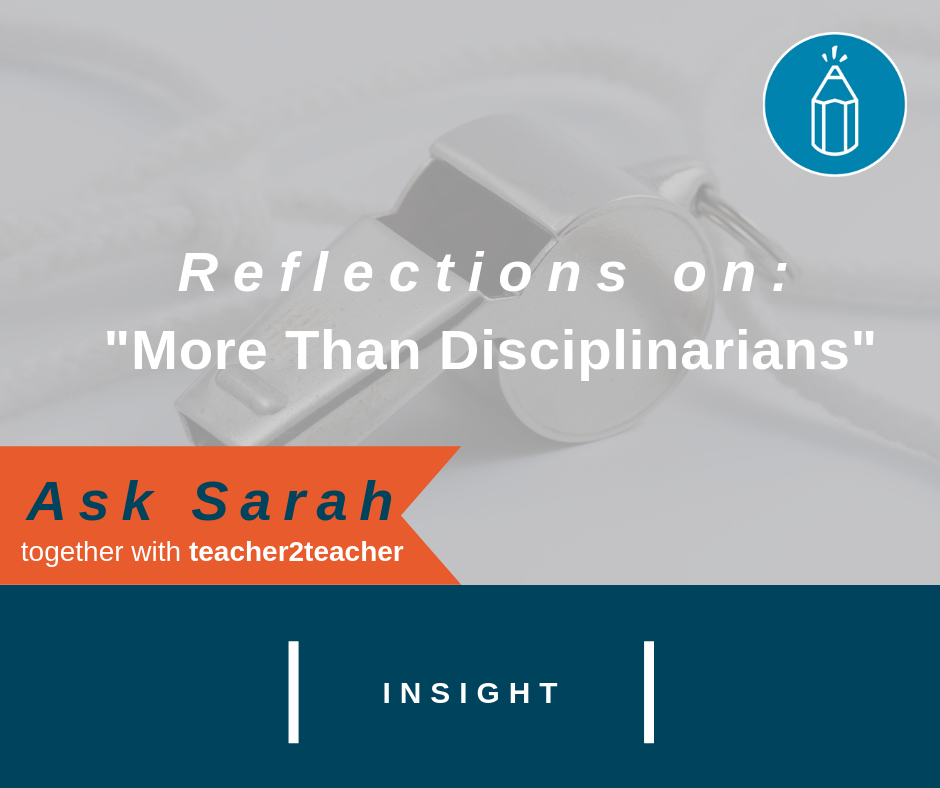 I often tell my students they should somehow be changed by the books they read. I ask them to pay attention to how they enter a text and see if they are different when they leave it. I suggest this is the mark of a worthwhile text; the ones that take us on a journey.

That’s exactly what my conversation with Josh Parker, William Anderson and James E. Ford did. It took me on a journey as they articulated and framed this crucial conversation about Black male teachers being more than disciplinarians. It’s stuck with me. Since we first recorded it and again this week. So instead of offering a new question this week, I thought I would share my reflections from the inaugural episode of Ask Sarah: the Big Questions.

Inside and outside. That’s what I keep coming back to after this conversation. Inside perspective creates outside understanding. When we suspend the outside, we can see inside. Paradigms define the outside, but people live the inside. If we want to get inside teaching, we have to get outside of ourselves.

Josh, William and James heightened my understanding of the paradigms that Black male teachers contend with. The pressure to be “better than the best,” to actively assert themselves as more than “Black boy whisperers.” I learned they’re not the only ones paying the invisible tax, but so are their students. When we treat teachers as tokens, we also teach our students to internalize a distorted version of themselves. And we must be better, do better than that. In fact, when the invisible weight on teachers surfaces, we have to own our collective responsibility to lighten it.

I learned we can’t let the outside be about “other;” rather, it’s in those margins we must all converge to change the narrative. As James E. Ford reminds us, “Teaching is a moral issue, it’s a human rights issue, and we need to change the way we frame it.”

I learned this re-framing means we see and accept the influence of language, that even though a language might grant access, it doesn’t make it dominant. It means we recognize and honor our colleagues who are always more than a stereotype. It means we support the kind of mentorship that not only sustains, but also elevates our Black male teachers.

“Teaching is a moral issue, it’s a human rights issue, and we need to change the way we frame it.” – James E. Ford

I learned that like so many complexities of teaching and learning, realization about how to maneuver within them comes slowly. William Anderson says, “This is not a lightswitch type of problem. It’s the long game and once you get it right, it’s so worth it.” He’s right. Ultimately answering this question about going beyond implicit or explicit stereotypes for Black male teachers is not like a lightswitch with a clear on or off switch. Ultimately, it’s not either-or, but it’s all of us. Together. For our kids.

“This is not a light switch type of problem. It’s the long game and once you get it right, it’s so worth it.” – William Anderson

Perhaps the truth is found where this conversation began: with a teacher, in a classroom, wanting to be more for his students. Or as Josh Parker invokes his uncanny wisdom: “Teaching is what truth looks like in public.” He’s right. It’s the inside truth that must find its way to our most public conversations.

“Teaching is what truth looks like in public.” – Josh Parker