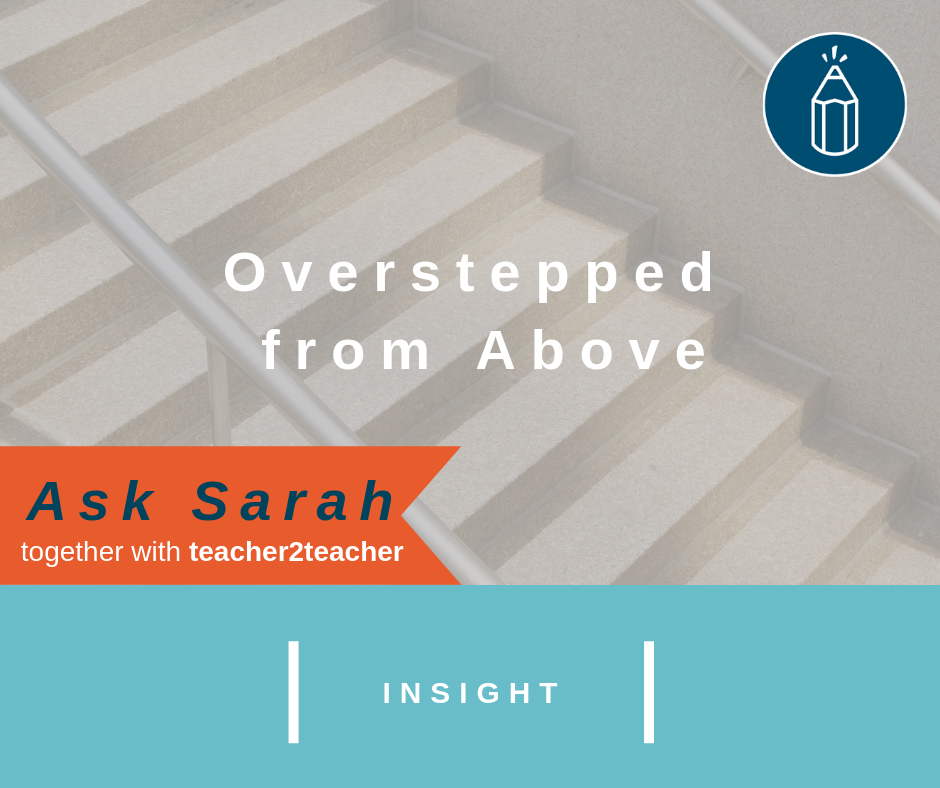 How do you deal with situations where you’re overstepped and disrespected by those above you? I had a situation this year that I had no idea how to handle.

Dear Overstepped from Above,

It’s an awful feeling, isn’t it? That heavy dread when you realize you’ve been overstepped. You feel suspended by uncertainty and reeling with questions. As quickly as you can manufacture the scenario that led to this crisis of confidence, you build your answers and reasons, your rationales and explanations. More than anything, all you want to do is scream, “But there’s more to the story!” The difficulty now, is that a story has been told, and at least one person has to revise the version they’ve already come to believe. Yet, the truth is almost always somewhere between the two.

I still remember the day my principal appeared outside my classroom door just before the end of my last class that afternoon. I could see he had a copy of the short story we had discussed the day before. Immediately I was in that awful space as my confusion gave way to quick understanding. A parent had complained about some language in the short story I’d given to my seniors and instead of coming directly to me, had gone to my principal. Dread: what did this mean? Uncertainty: does a person get fired over this? Rationale: they were seniors and this was a reputable piece of literature with a tight connection to our curriculum. Reeling: if I was getting in trouble for this, would I be getting in trouble for x, y and z too?

Thankfully, I had a wonderful principal who opened up a conversation with me and came with the goal of learning the whole story, instead of asking me to defend mine. Unfortunately, it had also gone to the superintendent who had been listening to an angry parent and had already determined the fault.

When feeling overstepped it’s natural to want sides: right and wrong, good and bad. You can get angry and complain to all your colleagues. You can get toxic and become complicit in spreading blame. But all that creates is more distance from purposeful resolution. Instead of defensiveness, default to explanation. Take a step back before you react and remember who you are: a teacher and this is your unlikely teachable moment.

Now, as much as ever, you need to call on your best teacher self. You need to listen, even when you disagree. You need to ask the questions that bring others to understanding. You can take responsibility when you need to and not only lead by example, but learn by it. You can ask the questions that bring others to understanding and help them draw new conclusions. You can share details that fill in the gaps of the story and engage in the slower, messier work of learning together.
Feeling overstepped means feeling devalued. We restore that value by resetting our boundaries. I know this happens to so many of us on the classroom level, and it’s happening to us as a profession right now. More than ever, we need to rely on exactly who we are: millions of intelligent, compassionate professionals who understand the difference between telling those who don’t understand and carefully teaching them what they didn’t know they needed.